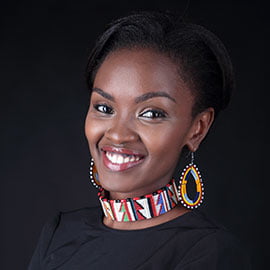 Suzanne Silantoi is a public policy analyst, who has just recently graduated from University of York with a Master of Arts in Public Administration and Public Policy. Suzanne was the youngest Nairobi senatorial candidate in 2017 at the age of 23.

Suzanne was part of the Short-Term Election Observation Mission of the African Union to the Federal Republic of Nigeria’s Presidential Election. The African Union deployed 50 short-term observers, led by our head of Mission Hailemariam Desalegn, who served as Prime Minister of Ethiopia between 2012 and 2018.

She was also part of the Short-Term Election Observation Mission of the African Union to the Republic of Sierra Leone’s 2018 General Elections held on March 7th, 2018 as well as the Run-Off Presidential Election held on 31st March 2018. The African Union deployed 40 short-term observers, led by the head of Mission Kgalema Petrus Motlanthe, who served as President of South Africa between 25 September 2008 and 9 May 2009.

She has been privileged to speak in various international youth forums such as the Africa Union Regional Youth Consultation on Harnessing the Demographic Dividend Through Investments In Youth in Arusha, Tanzania, the 4th and 5th Annual Continental Forum of Electoral Management Bodies in Kigali Rwanda and Ivory Coast respectively.

Suzanne has over 5 years of experience in the health development space. Currently she is running a podcast and YouTube channel known as ‘Is that so? With Silantoi’. The aim of this channel is to help us understand our role in governance and help raise a politically empowered generation through simplified civic education.