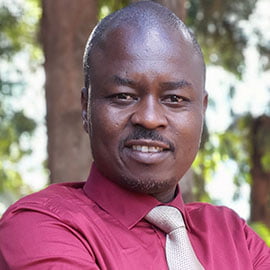 Joe Ageyo is the Editorial Director at Royal Media Services where he oversees news and current affairs across two tv channels and 14 radio stations. Joe has a wide experience in television journalism spanning a period of 20 years. During this period, he has also held various positions at the Kenya Kenya Broadcasting Corporation, the Nation Media Group as well as the Standard Group Ltd, where he was the founding Managing Editor of KTN News, the only 24-hour news channel in Eastern Africa.

As an editor, he has presided over the coverage of three General Elections and two
national referenda in Kenya. Joe who is a well-rounded journalist has excelled both in general news reporting as well in specialised areas such as science and environmental journalism.

Joe is a fellow at the Center for Governance and Sustainability at the McCormack Graduate School of Policy and Global Studies (MGS), University of Massachusetts, a Catto Fellow at the Aspen Institute, a member of the Communications Advisory Group of the UN Ocean Decade and a member of the Ethics Committee of the Kenya Editors’ Guild.